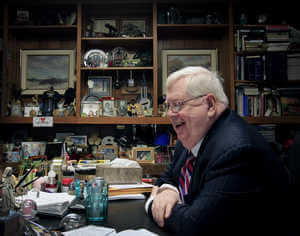 In the wake of the subprime lending crisis, the question that homeowners should be asking themselves as they contemplate refinancing is which mortgage lender will look out for their best interests–a trillion dollar multinational bank or a family-owned mortgage company that chose not to engage in subprime lending and specializes in refinancing FHA, VA and Conventional loans?

The answer is the latter, specifically James B. Nutter & Company.

To understand the heart and soul of James B. Nutter & Company, one need only read the terrific Kansas City Star article about the founder, James B. Nutter, Sr. Aptly titled “Mr. Mortgage”, the article traces the history of Mr. Nutter’s 61-year old national mortgage banking firm and reveals the important civic, political and social contributions that Mr. Nutter has made to American homeowners over the past six decades.

In the 1950s and 1960s, Nutter became one of the first lenders to make home loans in African-American neighborhoods and to single women. Nutter also made the first FHA reverse mortgage to a senior citizen. In addition to opting out of subprime lending, Nutter refused to charge junk fees to his customers, passing up millions of dollars in profits in doing so. Why? In Mr. Nutter’s own words, “Because it was the right thing to do.”

When asked how they select a mortgage lender, most homeowners typically reply, “The lender with the lowest interest rate.” However, in today’s mortgage lending world, there are fewer lenders from which to choose and interest rates are essentially the same for each lender. Instead, smart consumers compare closing costs among lenders and also examine the reputation of each lender, and it is in these comparisons that Nutter has traditionally excelled. The combination of a low interest rate and low closing costs is the optimal choice for homeowners, but even more so when the lender has the reputation of looking out for its own customers.

Many consumers still take their business to the big banks, but more and more smart consumers are going elsewhere. We advise that you not only take a close look at the interest rate and closing costs, but also examine what sort of values the lender exemplifies. We’re certain that after reading this article, you’ll take a much closer look at James B. Nutter & Company.