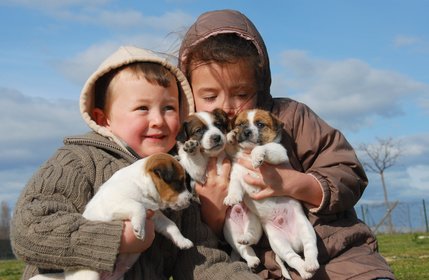 For James B. Nutter & Company, charity begins at home. While many corporations in America engage in some form of charitable giving, few can match the generosity of James B. Nutter & Company, a Kansas City-based mortgage lender that has provided critical financial support to dozens of local charities for over 65 years. The impacts of Nutter’s contributions can be seen everywhere in Kansas City, and in some cases their contributions have produced results that are nothing short of miraculous.

Charitable giving is one of many areas which sets Nutter apart from other mortgage lenders, and one that makes homeowners across the country want to do business with them. One such charity that has been near and dear to the Nutter’s hearts is Wayside Waifs, a large animal shelter and veterinary clinic that serves the Kansas City metropolitan area. While the number of abandoned, abused and neglected animals continues to rise in cities across the country, James B. Nutter & Company’s support of Wayside Waifs has helped Kansas City manage its animal population in ways that have enriched the lives of thousands of local families. Along the way, Wayside Waifs has become one of the premier animal welfare agencies in the Midwest.

The Nutter connection to Wayside Waifs began in the 1960s, when company founder James B. Nutter, Sr. and his wife Annabel adopted Ellie Mae, a young mixed breed dog who had been abandoned. At the time, Wayside Waifs was a small organization located in a rural part of Kansas City whose facilities could be generously described as ‘primitive’. The Nutters adopted Ellie Mae and the unconditional love they received from Ellie Mae sparked a family tradition of adopting Wayside Waifs animals that continues to this day.

Not surprisingly, animal shelters like Wayside Waifs rely heavily on donations from individuals and corporations to fund their general operations. During lean economic times, organizations like Wayside Waifs can sometimes struggle to keep their doors open. In the mid-1990s, Wayside Waifs was dealing with an unprecedented number of abandoned animals which had stretched their resources to the limit. Upon hearing of Wayside Waifs’ funding crisis, the Nutters stepped in and provided a crucial lead gift for a Wayside Waifs capital campaign.

Ever since the funding crisis was averted, the Nutters have supported Wayside Waifs in a multitude of ways. The Nutter Company provides volunteer and sponsorship support for Wayside’s signature events and routinely highlights adoptable Wayside pets through their social media channels. The Nutter family also funded the construction of the Nancy Nutter Moore Counseling Room, a private, comforting space on the Wayside Waifs campus for pet owners to say goodbye to their pets. The Nutters also provided another significant leadership gift to the 2012 Wayside Waifs capital campaign and were selected to be the Honorary Chairs of the 2013 Fur Ball Gala. Last but not least, James B. Nutter & Company was the Presenting Sponsor for the 2015 Home for the Holidays Open House, which helped Wayside find permanent homes for more than 150 animals.

The German philosopher Immanuel Kant once wrote, “We can judge the heart of a man by his treatment of animals.” Given their nearly six decades of support of Wayside Waifs, it’s is easy to see that Chairman James B. Nutter, Sr. and CEO & President Jim Nutter, Jr. have enormous hearts. Their vital support of Wayside Waifs continues to this day, enabling them to carry out their mission of placing adoptable companion animals in responsible homes. It’s just one more reason why America’s homeowners want to do business with James B. Nutter & Company.